The State of Data Loss Prevention

Why DLP Has Failed and What the Future Looks Like

Data loss – whether accidental or intentional – is a big problem for organizations. Why? Because people control our data, and people break the rules and make mistakes.
We’re only human. In fact, there’s been a 47% increase in incidents over the last two years; this includes accidental data loss and deliberate data exfiltration by negligent or disgruntled employees or contractors.

And, with GDPR fines totaling nearly $200 million between January 26, 2020, and January 27, 2021, data privacy regulations are going to drive the cost of resolution even higher. That’s one reason why data loss prevention (DLP) is one of the top spending priorities for IT leaders and why email is the threat vector most IT leaders are concerned about protecting.

The question is: Do security, compliance, and IT leaders have true visibility over how their employees are handling and mishandling data on email?

According to our research, not yet. But, after reading this report, they should have enough information to inform their view.

Ultimate Guide to Data Loss Prevention
Your data loss prevention (DLP) tools and strategy are critical to the safe running of your business. Read out ultimate guide to minimizing the risk of confidential or business-critical data leaving an organization.
Read more

Perhaps that’s why over half (61%) of employee survey respondents have training every 6 months or more and highly regulated industries like Financial Services and Healthcare have it even more frequently.

Security awareness training confronts the crux of data loss by educating employees on best practice and company policies. But, how effective is training and can it influence and actually change human behavior for the long-term?

Learn More
The State of Data Loss Prevention in Financial Services 2021
New DLP research from Tessian explores DLP in financial services. Download now to learn how frequently data loss incidents happen, why, and how to stop them.
Download Now 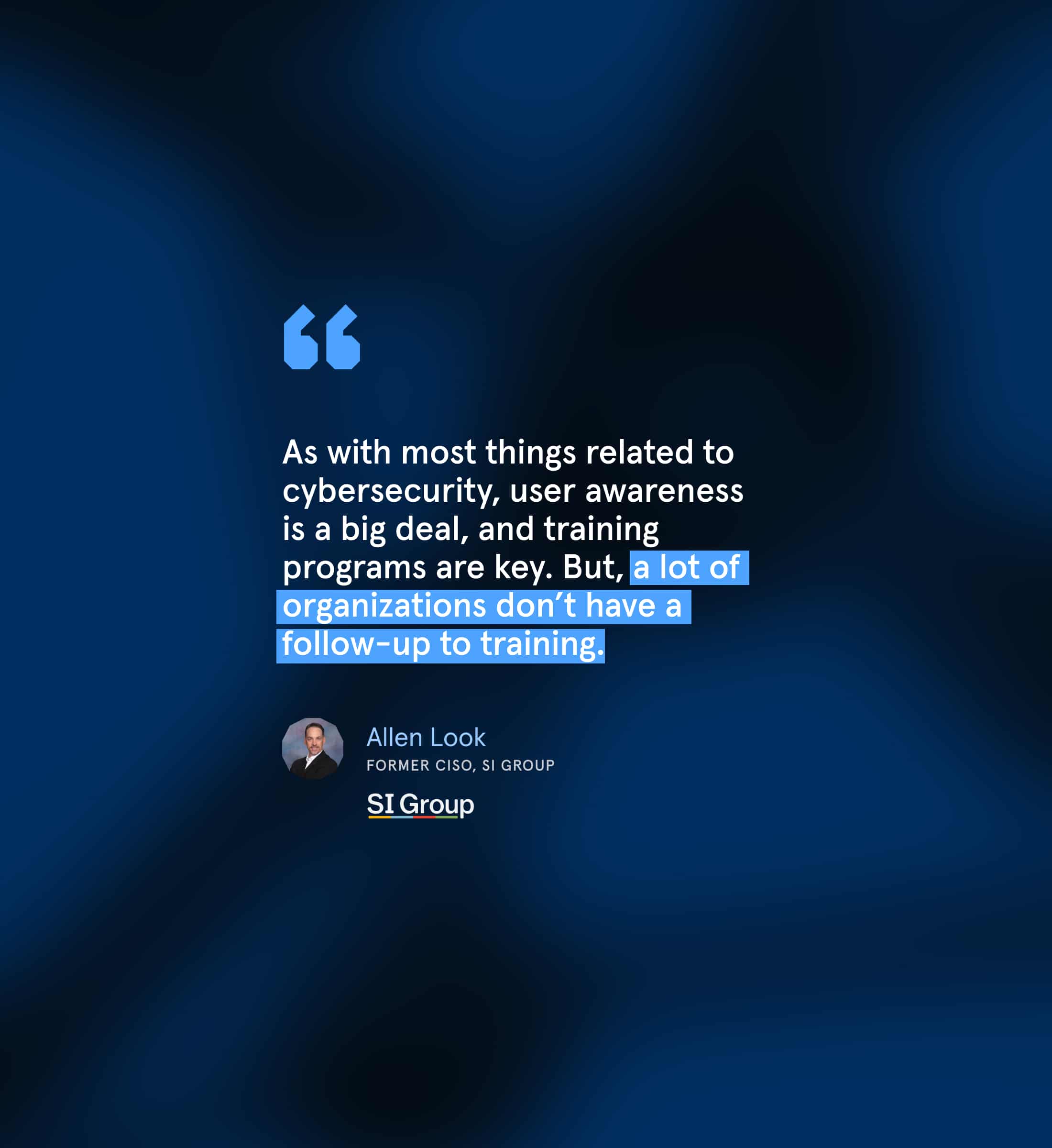 The percentage of the employees surveyed who admit to sending misdirected emails (emails accidentally sent to the wrong person) is the highest in organizations that provide security awareness training the most frequently: 63% of employees who receive training every 1-3 months say they remember sending emails to the wrong person. This number drops to 43% in organizations that conduct training once a year or less often.

Whether it’s because they’re afraid to admit wrongdoing or simply because they don’t know the implications or their internal reporting processes, this means many security leaders underestimate how many misdirected emails are sent within their organization every year.

For example, according to the survey respondents, 18-30-year-olds – who have grown up in an “always-on” culture – are 3x more likely to send misdirected emails than workers who are 51+. And, while 31-40 year olds are more careful on email, over half (57%) admit to firing off an email to the wrong person.

This is especially concerning because millennials (aged 22-38) represent the largest labor market share of any single generation.

Learn More
The State of Data Loss Prevention in Healthcare 2021
New DLP research from Tessian explores DLP in healthcare. Download now to learn how frequently data loss incidents happen, why, and how to stop them.
Download Now

Of course, sending company data to a personal email account can also be a sign of intentional data exfiltration by, for example, a disgruntled employee on their way out or an insider threat.

Based on the survey results, employees in the US break the rules more often than those in the UK. Not only are they twice as likely to send unauthorized emails, they’re also almost twice as likely to download, save, or otherwise exfiltrate work-related documents before leaving or after being dismissed from a job.

They also seem to make more mistakes. The likelihood of misdirecting an email doubles in the US, with 72% of US employees admitting to doing so compared to just 31% in the UK.

This suggests data privacy regulations like GDPR – which sparked a 44% increase in cybersecurity investment in the UK – could be influencing how people handle data. Will new standards like the CCPA effect similar positive changes in the US?

As many organizations have been forced to adopt remote-working structures and policies – and as more are opting to keep these flexible structures – maintaining visibility over data flow is now more difficult. The new office is a virtual one, which means past strategies have become obsolete. In fact, they became obsolete the day companies switched to remote-working. It’s no wonder, then, 84% of IT leaders say DLP is more challenging when their workforce is working remotely.

Nonetheless, 91% of IT leaders say they trust their employees to follow security best practice while out of the office.

Learn More
The State of Data Loss Prevention in Legal 2021
New DLP research from Tessian explores DLP in legal. Download now to learn how frequently data loss incidents happen, why, and how to stop them.
Download Now

When asked why they were less likely to follow safe data practices when working from home, employees cited not working on their usual devices (50%), not being closely monitored by IT teams (48%), and being distracted (47%) as the top three reasons.

It makes sense. When working remotely – especially from home – people have other responsibilities or distractions like childcare and roommates and, more often than not, they don’t have dedicated workstations like they do in their normal office environment. This isn’t trivial.

Machine learning based protections are a step in the right direction towards DLP, though. In fact, one in five (19%) security leaders believes machine learning and intelligent automation is the most effective way to prevent data loss.

Without inhibiting employees or burdening IT teams, machine learning algorithms trained on millions of your own historical email data points can understand normal patterns of employee behavior and accurately and automatically predict when they’re making a mistake or breaking the rules.

Next Generation DLP takes human error out of the cybersecurity equation, protects your people, and empowers them to work safely wherever they are.

While sending an email to the wrong person, forwarding company data to a personal email account, or disregarding security policies every now and then may seem inconsequential to employees, these behaviors can and do lead to data breaches.

According to Tessian’s own data and survey results: Download the full report for even more insights about how to effectively prevent data loss, the challenges associated with remote-working, and the behaviors and attitudes of employees.

METHODOLOGY
In addition to using Tessian platform data, we commissioned OnePoll to survey 2,000 working professionals: 1,000 in the US and 1,000 in the UK; additionally OnePoll surveyed 250 IT leaders in the US.

Survey respondents varied in age from 18-51+, occupied various roles across departments and industries, and worked within organizations ranging in size from 2-1,000+.

We also interviewed several IT, security, and compliance professionals with diverse backgrounds, all of whom provided insights that helped frame this report.

Publically available third-party research was also used, with all sources listed in the downloadable PDF.