Why Cybercrime is Thriving, And What You Can Do About It

Cybercrime is big business. But just how big? Well, big. A recent report from Cybercrime Magazine predicted cybercrime would cost the world $10.5 trillion annually by 2025. Bear in mind that estimates in 2020 were just over half that, at $6 trillion, and up from $2.9 trillion in 2015. So ,why is there a cybercriminal gold rush? And why are attacks getting increasingly more sophisticated, more numerous, and more successful?

Legacy solutions are no match for today’s attacks

As we noted in our recent Spear Phishing Threat Landscape Report, attacks are getting more sophisticated and are bypassing traditional defense systems like rule-based Secure Email Gateways (SEGs). We know this because we examined platform data and found that between July 2020 and July 2021, Tessian scanned nearly 4 billion emails and flagged nearly 2 million as malicious. These emails sailed right past our customers’ Secure Email Gateways (SEGs) and native tools and would have left employees as the last line of defense if it wasn’t for Tessian. Not only that, attacks are getting more frequent. Cybersecurity Magazine estimated a new ransomware attack hits every 11 seconds.

Oftentimes, big problems (like paying out millions for a ransom) can be traced back to small oversights. Like not using Multi-Factor Authentication (MFA). This is particularly common in mid-market SMEs, despite the fact that Microsoft Research found that MFA blocks 99.9% of all automated attacks.

As Dave Kennedy, Founder of TrustedSec said at our Spring 2022 Human Layer Security Summit, just 22% of O365 users have MFA enabled. And so attackers can target these firms much more easily. SMEs also have smaller budgets and headcount allocated to cyber compared to the enterprise. The result: 60% of SMEs file for bankruptcy within six months of a breach.

If someone broke into your office, chances are you’d know about it quickly and do something about it. Unfortunately, the same doesn’t apply to many organizations’ networks and inboxes. From a simple way of sending asynchronous ASCII messages between user accounts on an academic network in the 1970s, email has grown into a world-devouring beast that is the very backbone of commerce and information exchange. Over 7 billion users globally send and receive 333.2 billion emails a day. Such a vast user base means email is the number one threat vector.

After all, for many, moving data via email IS their job. What’s more, email is on all our devices: desktops, tablets, and phones. But as Will Patterson, Enterprise Customer Success Lead, notes in this webinar, email has some inherent problems when it comes to security. Firstly, it’s open (in that you can email anyone) and secondly, email attacks are cheap to deploy; they’re effective and can be launched from anywhere. A big audience and low entry bar make it the ideal medium in which to conduct attacks.

It’s no wonder 90% of phishing occurs via email.

Cybercriminals continue to attack because those attacks continue to be successful, netting potentially hundreds of thousands of dollars from companies for little effort and risk (compared with other types of crime).

The international nature of cybercrime adds another layer of complexity and helps shield attackers from law enforcement. According to the FBI, in 2021, BEC scammers made over $2.4 billion – far more than via any other type of cybercrime. Of course, the cost to the company isn’t just these initial losses, it’s the further costs of containing, reporting, and remediating the breach. IBM currently puts the cost to businesses at $4.24 million per breach.

ATO/BEC
What the Ransomware Pandemic Tells Us About the Evolution of Spear Phishing Attacks
by John Filitz Thursday, January 6th, 2022

It’s faster, easier, and cheaper than ever to execute attacks

With such a big potential target group, attackers are using automation and off-the-shelf tools to not only launch attacks but process the data they exfiltrate in the process. And as James McQuiggan, Security Awareness Advocate at KnowBe4, said at our Fall Human Layer Security Summit, “the bad guys are buying the same hardware and software configurations we’re using – they’re then testing their attacks and then see what gets through”. So if criminals are automating many of their repetitive processes, you should too.

Not only that, but it’s also easier and cheaper than ever to execute attacks, and technical skills are no longer required. There are numerous tools, platforms, and services that make executing attacks as easy as building a webpage. The following open-source intelligence (OSINT) apps and tools can be used to gather precise information about a person’s social media details, location, and their work email address, making it impossibly easy to identify and manipulate a target. 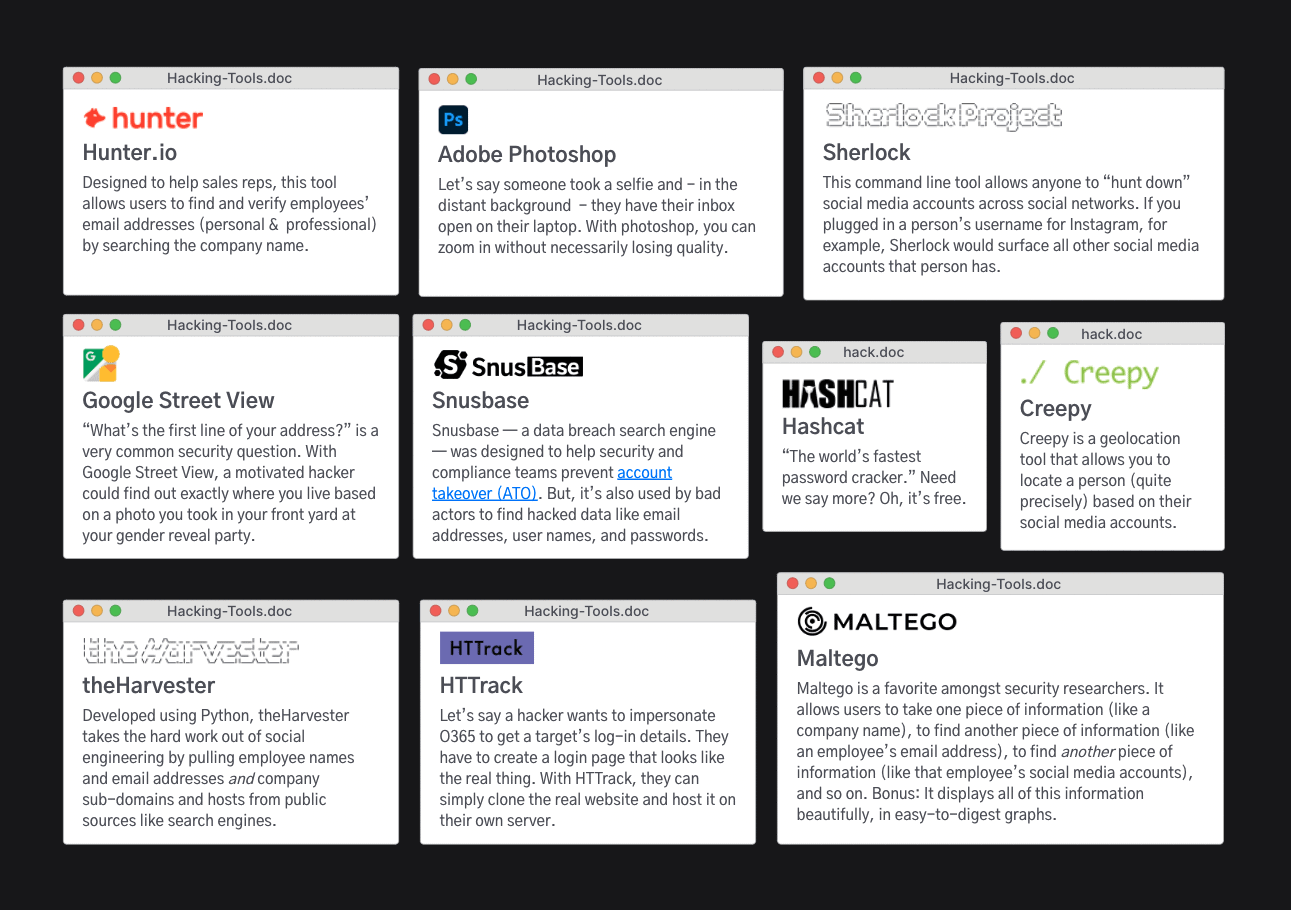 Security teams are burned out

Against this cybercrime tsunami stands the CISO and the company’s security team, and the daily battle to keep employees and the organization safe. That’s taking its toll on security teams, who are often stressed and burned out. Our Lost Hours Report found CISOs regularly working extra hours and overtime to keep the company secure from threats.

The CISOs we surveyed worked, on average, 11 hours more than they’re contracted to each week. Nearly 1 in 10 work 20-24 hours more a week. What’s eating up that time is dealing with potential breaches. A quarter of respondents say they spend 9-12 hours investigating and remediating each threat caused by human error, while more than 1 in 10 spend more than a day.

A global study by The Ponemon Institute found that the average amount of time required to identify a data breach is 197 days. that’s over six months. It then takes another 69 days on average to contain and deal with the fallout of that breach. Better alerts and warning systems, as well as swift procedures in place to respond to them, are a must. Over six months is more than enough time to wreak havoc in a network. In medicine, there’s the concept of ‘the golden hour’, security needs to aim for a golden 24 hours because the faster an organization can respond the better and faster its recovery will be.

ATO/BEC
Five Benefits of Automated Email Security Reporting
by John Filitz Friday, January 21st, 2022
“Believe me, hackers are willing to try 24/7. They have nothing but time. This is something businesses don't have. An employee working 9-5 just doesn't have the same commitment to protecting a company as a hacker has to hacking a company. That means hackers have a big advantage here. ”
Alon Gal Co-Founder & CTO, Hudson Rock

Employees are busy, stressed, and distracted

The modern workplace is a fuzzy blend of devices (laptop/phone) and locations (home/office/coffee shop etc) with people constantly switching between them trying to juggle, on average, around 100 emails a day. You can see why our Psychology of Human Error report found that 26% of people fell for a phishing email at work in the last 12 months alone. People are maxed out trying to do their jobs, and it’s exactly this pressure that attackers are looking to exploit and manipulate, which underscores the important of building a positive security culture alongside HR.

So, as cybercrime is becoming more and more profitable, here’s what you need to do to strengthen your security stack and keep your people and organization safe: