Step Into The Future of Cybersecurity — Save your spot at the Human Layer Security Summit for free.

Request a Demo of Tessian Today.
Automatically stop data breaches and security threats caused by employees on email. Powered by machine learning, Tessian detects anomalies in real-time, integrating seamlessly with your email environment within minutes and starting protection in a day. Provides you with unparalleled visibility into human security risks to remediate threats and ensure compliance.
Subscribe to our blog
Industry insights, straight to your inbox every week
Customer Stories DLP

Having deployed Tessian at the end of 2020, Israel Bryski, Head of Information Security at an investment management firm headquartered in NYC, shared how Tessian has helped him and his team improve their security posture while changing employee behavior long-term.

The firm, which was formed in the early 1980s, has offices across Spain, Germany, the UK, and Singapore, and currently has 200 employees managing retirement plans and investments for roughly 30,000 current and former Mckinsey employees.

Their journey to Tessian

Explaining the “why” behind policies to change behavior

For Israel and his team, education is key.

Having learned from their custom-built Outlook Add-In which warned employees when an email was being sent to the wrong email address, but didn’t offer insight into the “why”, the team wanted to find a solution that offered context and that would bolster their security awareness training programs.

They found that in Tessian and, since deployment, they’ve actually seen a change in behavior and a reduction in data loss incidents. 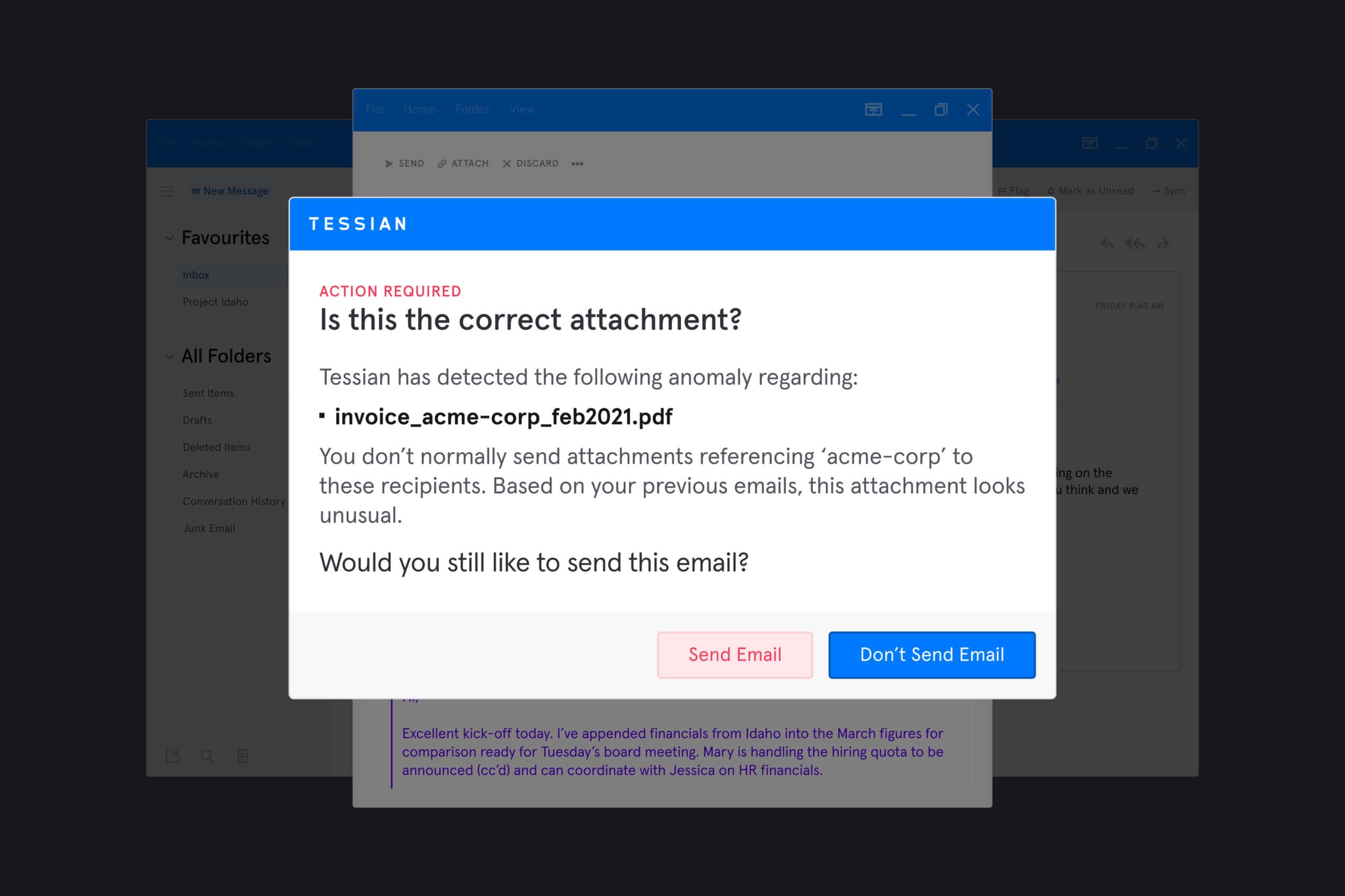 In this example, Tessian Guardian is warning the employee that they have likely attached the wrong file to an email.

Learn more about why in-the-moment warnings are so effective.

Because Tessian is powered by machine learning instead of rules, it’s able to detect data exfiltration attempts and misdirected emails with incredible accuracy. In fact, on average, employees receive just two warning messages per month.

That means when an email is flagged, they pay attention.

Better still, Tessian gets smarter over time and evolves in tandem with changing relationships. As data becomes more accurate, false positives decrease. And with a decrease in false positives, comes an increase in trust.

“We’ve seen numerous examples where Tessian’s contextualized pop-ups add value. When they do come, they are context-rich. Not only have we prevented potential breaches, but we’ve helped educate our employees and make them more engaged. Over time, we’ve actually seen how behavior can change and risk can be reduced.”
Israel Bryski Head of Information Security

Since deploying Tessian, over 100 data loss incidents have been prevented.

It goes to show: Tessian does more than prevent breaches. It also saves employees from red-faced embarrassment.

Israel and his team have gotten kudos from quite a few people in the firm. One exec in particular was always casting a shadow over the different security tools that had been deployed.

He explained, saying “When we got kudos from him, that was a big win in my book! He actually sees the value of Tessian, why we’re purchasing new technology, and why we’re constantly evaluating new solutions on the market that can augment and complement our security program.”

Interested in learning more about how Tessian can help prevent accidental data loss in your organization? You can read some of our customer stories here or book a demo.

Subscribe to our blog
Industry insights, straight to your inbox every week
Related posts